Visitors in the Arboretum this September may see signs warning, “Caution: Active Wasp Nest” around the landscape. In addition to highlighting places for visitors to avoid, these signs also highlight a management change when dealing with stinging insects. While in the past the grounds staff most often sprayed wasp nests with pesticides, they now assess them for danger to the public and preserve them whenever possible. This is because, despite their potential for painful stings, these organisms play a valuable role in our urban ecosystem. As a result, they deserve a chance to be examined and admired (from a safe distance) rather than destroyed for posing an easily-mitigated threat.

Although New England is home to hundreds of species of wasps and bees, only a small number (including yellow jackets, bald faced hornets, paper wasps, and bumblebees) are responsible for painful attacks on humans. This is mostly due to the high-pressure life-cycles of these social insects. This cycle starts with the springtime emergence of native wasp and bee queens (called foundresses) from their winter shelters under logs, in the leaf litter, in dead trees and in small cavities. Each foundress searches for a good nesting site (location depends on species), begins to lay eggs, and gathers food to provision their future young.

If the queen and her retinue of workers survive, the colony will grow throughout the summer. Worker bees busily collect nectar and pollen to provide food for the colony, while wasps and hornets (which are carnivorous) typically hunt for caterpillars, spiders, and other arthropods. If all goes well, the mature colony will collect enough resources to begin raising hundreds (sometimes thousands) of new queens and drones (males). In late summer and early fall, these leave the nest on mating flights and do not return. The newly mated queens then shelter for the approaching winter. Soon after (in New England, at least), the first frosts of autumn will kill the remaining workers and original foundress queen.

Viewed from this perspective, the short period at the end of summer when new queens and drones take flight is the most important part of the colony’s life. If a predator finds and eats the developing royal pupae before they emerge, all of the colony’s hard work will have been in vain. As a result, wasps and bees become increasingly territorial and aggressive as the summer deepens (the warmer weather also increases their energy). This often means more stings for our grounds staff and for unsuspecting visitors as well.

However, the threat of stings may be a small price for the benefits these insects provide. The often-vilified yellow jackets and bald-faced hornets, for example, consume the caterpillars and aphids that feed on our plants and help keep their populations in check. At the same time, they serve as great pollinators, since workers visit many of our flowering trees to gather nectar. These two species are themselves an important food source for brave mammals, such as racoons and skunks, and often construct beautiful nests, sculptures in our landscape that no artist could match. Finally, like anything that adds diversity and complexity to the ecosystem, they are valuable simply for existing, regardless of the benefits (or lack thereof) that they provide to us.

None of this is meant to downplay the very real risks that bee and wasp stings pose to those with allergic reactions or even those who simply don’t want to get stung. Indeed, we encourage visitors to call the Visitor Center (617.384.5209) or an Arboretum Ambassador (617.268.3185) whenever a wasp nest is found. We evaluate each nest for potential harm to visitors and continue to remove nests located too close to major roads or paths. On the other hand, if you see one of our warning signs, consider taking a moment to overcome your apprehension and very carefully observe the busy lives of these amazing insects. After watching for a few minutes, perhaps you’ll walk away agreeing that the threat these insects pose is less than the value they add to these dwindling summer days. 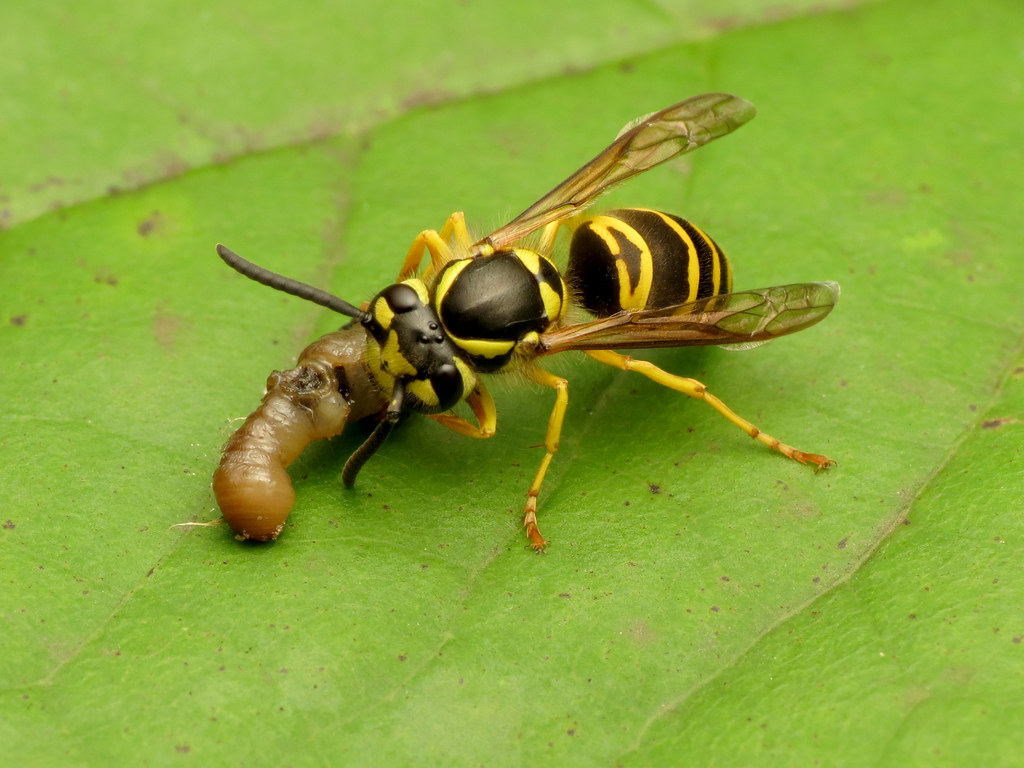 Perhaps the most well-known, and least liked, wasp in New England. This species most often nests in concealed holes in the ground, making them particularly hard to find and avoid. However, they are voracious predators and hunt “pest” insects, such as caterpillars and aphids (or earthworms, as in the photo). They also seem to enjoy soft drinks and sandwich meat–the sugar and proteins provide much needed nutrients for the growing queens inside their colonies.

Despite the name, bald faced hornets are technically wasps as well and related to yellow jackets. This species builds large paper nests that hang from the very ends of tree branches in order to avoid predation by climbing animals, such as raccoons. Workers construct these beautiful structures by chewing wood and mixing it with their saliva to create a pulp that dries to paper.

Eastern cicada killers are common around our ponds, where females excavate burrows to lay their eggs. As very large wasp (up to 2 inches long) they look terrifying, but are actually quite docile. Unlike the other species in this list, they do not nest in colonies and do not aggressively defend nest sites. Nonetheless, homeowners often kill them out of the misperception of danger. Female cicada killers capture and immobilize cicadas, which they then bury with their eggs to provide food for the developing larvae.

There are many species of bumblebees in New England, all of which predominantly build nests underground. They are typically not as aggressive as wasps and hornets, partly because colony populations are not as large. Unfortunately, the decline of native bees is correlated with declines in suitable ground nesting habitats, and perhaps the propensity of people to spray them as well.

Honeybees are not native to North America and colonies are not often encountered in the wild. However, if you do happen across a colony of honeybees in a house or abandoned space, or see a cluster of bees clinging to a wall or tree, you can contact a local beekeeper. With the proper equipment, it is possible to safely collect entire colonies without being stung or resorting to pesticides.